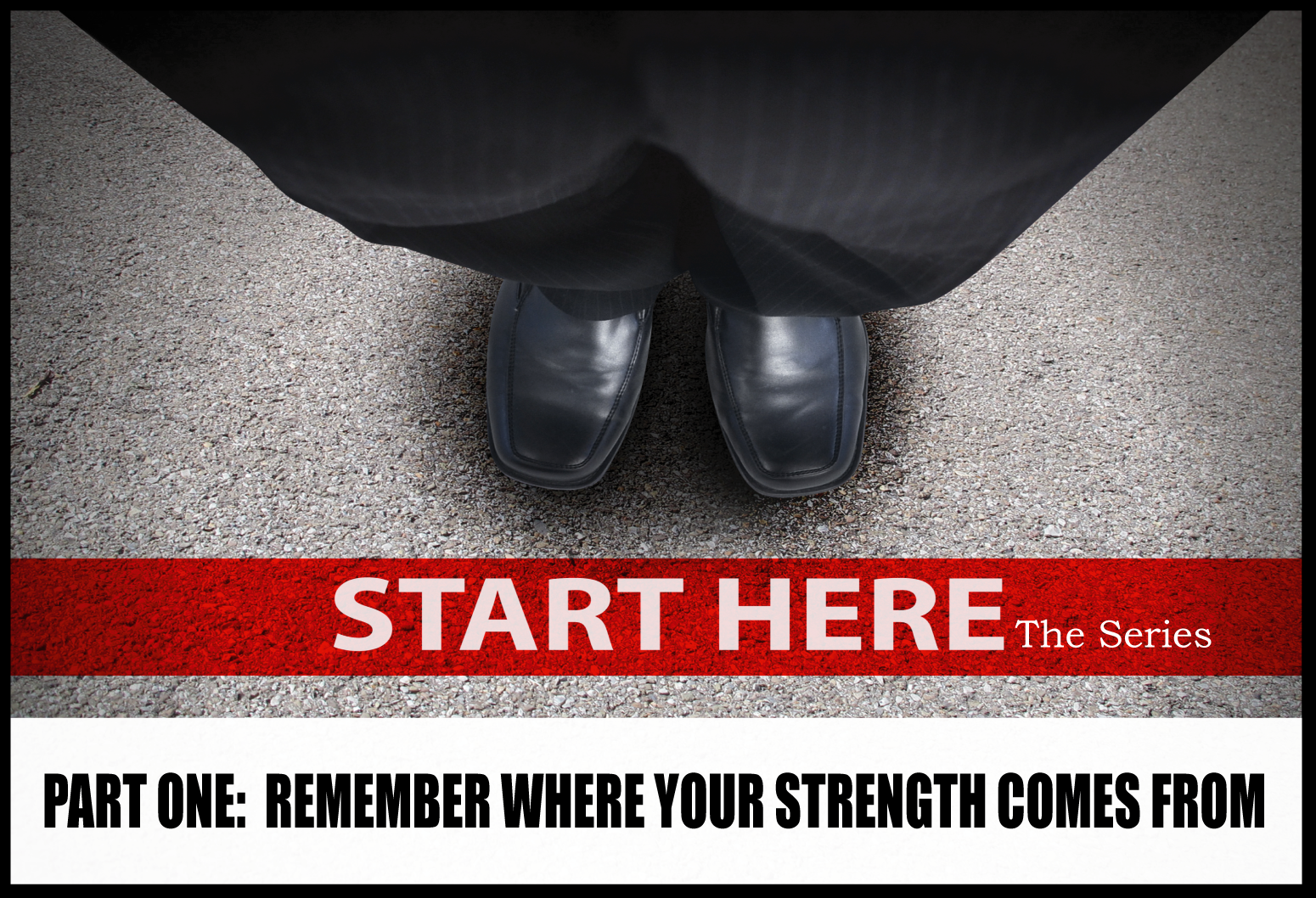 We all have days when we just feel like giving up.

We want to quit and we don’t care who thinks we’re a quitter. We’re tired, overwhelmed, weak, and frustrated – all shoved into one sloppily packed emotional suitcase.  Our life is out of control and headed nowhere as fast as possible.  We want to regain control, stop our head from spinning, and hit the reset button.

You know, we really need to come to this point in our life because it makes us pull the emergency brake, screech to a halt, and take a closer look at what in the world is going on. You’re doing 100 different things but none of them well because you’re not focused.  You’re even doing a lot of good things for the Lord but not necessarily the things that He’s calling you to do.

Many times, as we begin to figure all of this out, we also find ourselves feeling like an island. During our quest for “doing”, we’ve isolated ourselves and neglected important relationships – our spouse, our children, our friends, and even God.  So we hit the brakes, analyze our life, and find out that we are older, out of energy, and distant from family, friends, and God.

Nice.  Now you feel even worse.   So, what do you do?  At this point you have two main options.

Yep, you could quit.  That’s always an option and many people have taken it.  Of course it’s not a good one because the one who quits never knows what could have been, never knows how close they were to victory, and quitting can haunt a person for the rest of their life – potentially throughout eternity.  People quit their jobs, their marriages, their friendships, and their relationship with God all the time. They believe they just can’t handle it all.  And since they can’t do it all, they decide to do none.  Some even decide to quit life all-together and take theirs.

We won’t spend much time talking about quitting because that’s the wrong choice. Let’s talk about “starting” instead. You’ve realized you cannot go on as you are so you lay your life out on the table for closer inspection.  You look at different responsibilities, commitments, and relationships.  You see how over commitment has limited your spiritual growth, financial stress has wrecked your peace, and long hours at the office has hurt your family.  The spiritual passion you once had has fizzled and the calling God placed in your heart now feels like a nearly forgotten dream. Obviously there is too much going on and you need to refocus but where do you start?

To find out, we’re going to look at some guys from the bible who came to a quitting point.  All had a calling on their life from birth. Some knew it, some didn’t. But they were destined to be used by God, even when things seemed hopeless. In parts 2 and 3 we’ll look at David and Gideon.  Today, we’ll start with Samson.

#1.  Remembering our strength is from God, not in our ability.

Samson had a calling on his life from birth.  He had been given special gifts in order to fulfill God’s plan for him – to be a judge over Israel.  As we track Samson through the book of Judges we see him get further and further from the Lord and the plan that He had for his life.  Ultimately we see Samson shaved, blinded, and a slave to the enemy he had once conquered.

One day a boy leads Samson to a big party the Philistines were having so he could be the entertainment.  Once again he finds himself surrounded by his enemies.  At one point in his life he could’ve killed every one of them with a donkey’s jawbone but now he is weak and blind. To most people things look pretty hopeless for Samson, but they’re not – not even close.   In the midst of his enemies, who are celebrating and laughing at him, Samson remembers the calling God put on his life.  He remembers where his strength is from.  He prays that God will allow him one last opportunity to destroy the Philistines, the enemies of Israel.  God hears him, restores his strength, and once again Samson operates in his calling.

Maybe you feel you are in Samson’s position.  You know God has given you a mission. You and even other people have recognized talents that He’s given you to make that mission possible.  But you also know that, instead of bringing God glory with those talents, you’ve wasted them and used them for your own benefit or recognition.  Now you feel your abilities have been taken or limited, you feel spiritually in the dark, and know the devil is sitting back laughing at you.

You think it’s over and you’re about to give up.

When you feel hopelessly far away from God and the calling that He spoke over you, don’t quit!  Do what Samson did.  In the middle of your weakness, in the darkness, while the enemy is laughing – remember where your strength comes from. It wasn’t from your talents in the first place, it was from God.  He initiated the calling and He is able to renew your strength and focus.   Return to him and He will return to you!

The devil wants nothing more than to make you feel that your life and situation are hopeless and that God has removed His hand from your life.  Don’t believe the lies!  God loves you and has great plans for you.  He says so in His word.  But it all starts with remembering where our strength, our peace, our very life begin.  They begin with Christ, the Author and Finisher of our faith.

To wrap up Part One of the “START HERE.” series, I want to leave you with a poem I came across.  The author is unknown but the message is true.  Please take a minute to share your thoughts in the comments area below.  Have you ever felt like quitting?  What made you keep pushing forward?  I’d love to hear about your experience!

When things go wrong, as they sometimes will,

When the road you’re trudging seems all uphill,

When the funds are low and the debts are high,

And you want to smile, but you have to sigh,

Rest if you must – but don’t you quit.

Life is queer with it’s twists and turns,

As every one of us sometimes learns,

And many a failure turns about

When he might have won had he stuck it out;

Don’t give up, though the pace seems slow-

Often the goal is nearer than

It seems to a faint and faltering man,

Often the struggler has given up

And he learned too late, when the night slipped down,

How close he was to the golden crown.

Success is failure turned inside out –

The silver tint of the clouds of doubt,

And you never can tell how close you are,

It may be near when it seems afar;

So stick to the fight when you’re hardest hit –

It’s when things seem worst that you mustn’t quit.

Have something to say? Leave a Comment! Cancel reply